Adenoids Vs polyps Vs turbinates

“Doctor, my child has polyps”, “doctor, my GP told me I have polyps”, “Doctor, I heard that polyps come back when they are removed”, “doctor, my polyps surgery was very difficult and bloody and needed packs and you say you are going to do it for my child as a day surgery with just 5 minutes?!!”, “Doctor, some doctor told me that polyps are removed by coblation in the clinic”, “doctor, why can’t you see my daughters polyps, aren’t they in the nose?, why are you looking in the mouth ??”

For patients, and most general practitioners, every nose block is a polyp. The term “polyp” is over used and misused in most of the cases, that’s why I decided to write this article to make things clear in term of nomenclature for a very common problem.

In this article I am not going to discuss the causes of nose block, I am just trying to describe the true name and nature of some common problems in the nose and to highlight the main differences between these misnamed problems. (Please refer to nose block in adults and nose block in children articles for the talk about nose block).

Turbinates are part of the normal structures of the side wall of the nose, they are three on each side, an inferior, middle and superior, they are formed of bone covered with mucosa, the lower (inferior one) is actually a reservoir of blood that humidifies and warms the air that comes through the nose, and usually has thicker mucosa, for that reason, the blood inflates one side’s turbinate every 8-10 hours in what is called the nasal cycle, usually we don’t feel this inflation because its normally gradual. Infection or allergy causes inflammation and increase in the size of these turbintes by increasing the blood supply or the thickness of the mucosa cover respectively. When the size of the turbinate is big the cavity of the nasal passage will be narrower, and the patient will start feeling a
lternating nasal block from side to side, and when it is more sever the nose will be continuously blocked. Treatment of this situation is the treatment of its cause, the infection or the allergy, which includes medical treatment for acute cases and medical with or without surgical treatment for chronic cases. Surgery for reduction of the size of the turbinate might be needed if we want to shrink them down. Surgery could be done by different ways, by cuttery, coablation, or microdebrider, they can be done under local or general anesthesia, but the maximum effect could be done by what is called endoscopic submucosal turbinectomy by microdebrider under general anesthesia. Since the cause of inferior turbinates enlargement is inflammation due to infection or allergy, recurrence of the problem could happen after medical treatment and even after surgery, the recurrence rate and speed is determined by several factors including the type of surgery done, the experience of the surgeon, the exposure to the allergen and the severity of the patient’s allergy.

Adenoids are the lymphoid tissue present in all children in the upper part of the back of the nose (the nasopharynx), they are composing 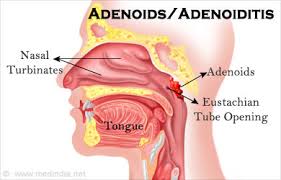 a ring like lymphoid group with the tonsils and their work is to fight throat and nose microbes. They usually start to shrink down by the age of nine years and rarely seen in adults. With sever allergy or infection, they will get inflamed because they are fighting infections, which is something healthy and normal, and it’s part of the causes of nose block during flue in children. The problem starts when these adenoids stay large for a long time after the infection is resolved, or when they are enlarged due to allergy and stay large and blocking the back of the nose, because in the back of the nose the two cavities join to form one cavity, any large blocking mass will leave the patient with no place to breath except from the mouth, so patients present with prolonged snoring and mouth breathing, this has negative effects on the chest and the mouth, on the long term it will cause permanent changes of face appearance, on the other hand, the block of the back of the nose will block the two Eustachian tubes that connects the nose to the ears and ventilates the ear, which will cause accumulation of fluids in the middle ear causing decrease hearing and recurrent infection of the middle ear. Diagnosis of large adenoids depends on the history taken by the parents and the appearance of the face, combined by the presence of post nasal discharge from the adenoids seen in the back of the mouth, this could be confirmed by endoscopy of the nose which is most of the times difficult without anesthesia, so it is substituted by looking at the adenoid by a mirror positioned in the back of the throat, or by x-ray for the nasopharynx. The Treatment of enlarged adenoids starts also with medical treatment, when this fails, removal of the adenoids could be done by surgery.

Adenoidectomy (removal of adenoids) is a simple 5-10 minutes surgery done under general anesthesia by removing the adenoid by a curate like metal through the mouth cavity in most of the cases, bleeding after the surgery is usually stopped before waking the patient up. The patient will be discharged in the same day. Pain and bleeding afterwards is very rare. Recurrence of adenoids after surgery is very rare but it can happen and is either due to incomplete removal or due to sever chronic allergy.

Nasal polyps (or what should be the only one called nasal polyps) are nasal masses that are not present in normal people, they are benign masses that are formed from inflamed sinus wall mucosa, they enlarge slowly with time till 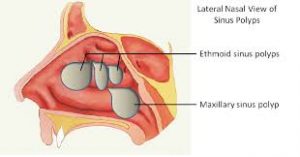 they fill the sinus cavity, then go out of the sinus to the nasal cavity to start blocking the nasal passages and causing nose block, they might arise from any sinus and from any side, and usually this is related to sever chronic allergy, they are rarely seen in children, unlike adenoids which are mostly seen in children. Diagnosis of nasal polyps include examination of the nose, polyps might be easily seen in the nose or an endoscope might be needed to see them depending on how large and expanding they are, CT scan for the sinuses is needed after diagnosis to evaluate the extent of spread of the polyps and their relation to the surrounding structures of the sinuses including the brain and eyes.

Treatment includes medical and surgical therapy, but unlike the previous two problems, these masses will not be cured by medical treatment and usually they need surgery, moreover, they usually and typically recur after surgery and need several surgeries during the life of the patient. Surgery of nasal polyps include cutting off the masses with microdebriders and cutting instruments under endoscopic guidance and under general anesthesia, which involves a sinus surgery to widen sinus openings and remove polyps from the inside. So the endoscopic sinus surgery for nasal polyps is a more complicated surgery and could have more severe complications and side effects than surgeries conducted for adenoids or turbinates, and the post operative period includes more bleeding, pain and discomfort. Recurrence rate is also related here to the severity of the allergy, presence of some other medical problems, and the experience of the surgeon and his/her ability to remove the polyps from their origin, it’s like cutting a tree that has grown from the street to your second floor apartment widow, if you removed the branches in the apartment, they will rapidly grow back , but if you could go deep to the street and cut it from there, it will take longer time before it grows back to your window, but obviously, this needs more effort, experience and instruments and may cause damage to the window and the street structure. This is very similar to nasal polyp sinus surgery, the surgeon needs to use the instruments that allow him/her to go inside the sinuses and he/she needs to take the decision of cutting as much polyps as he/she could without causing harm to the structures around the sinuses like the eyes and the brain. For that reason we find the dilemma of “sinus disease recurrence” or “sinus surgery recurrence”, actually the recurrence is relative and dependent on many factors and is mainly related to this specific diagnosis among all sinus diseases.

The take home massage from this article is to know that what we usually call a nasal polyp is not always a nasal polyp and that the variety of sinus related problems makes comparison between your problem and your friend’s or child’s problem is not really correct and will lead you to a wrong diagnosis, wrong estimate of the severity, and wrong expectations for the surgery results, so I advise every patient diagnosed with “Nasal polyp”, “Sinus disease”, “Infected sinuses” or “Blocked sinuses” to ask his/her doctor about the exact name of the diagnosis he\she actually  has and it’s description. also read (sinus disease between truth and misconception)