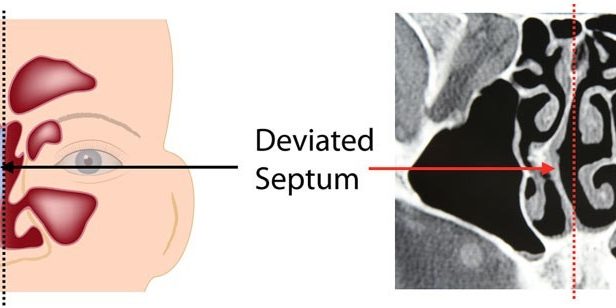 “Doctor, they told me I have the cartilage and I need surgery”, “Doctor, I want to do septoplasty because my nose is broad and curved”, “Doctor, I underwent septoplasty but my breathing is still bad”.
The nasal septum is the thin wall that separates the two sides of the nasal cavities, this is mainly made of cartilage and bone covered with thin mucosa, its centralized normal position in the midline of the nasal cavity makes the two nasal cavities almost symmetrical, nonetheless, nothing in the body is really symmetrical, and so, very commonly this septum is not straight.
While the nasal septum may have important role in the shape of the nose beside the air passages width, it’s very important to know that most of septal correction surgeries are not done to correct the shape of the nose and that the shape of the nose is affected by many factors including mainly the outer bones and cartilages of the nose rather than the septum, this is very important to clarify for patients who commonly come to the clinic seeking for septum correction aiming to correct the shape of the nose while they have no nose block issues.
The septum is one of the factors that affect the air flow in the nose and it’s deviation will negatively affect breathing, but we have to know that not every deviati 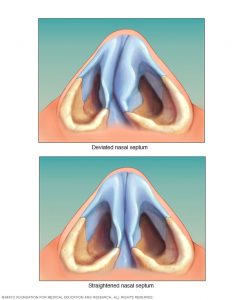 on causes problem; the site of the deviation, the severity of the deviation and the association with other problems in the nasal and sinus mucosa, are very important factors in determining the effect of the septal deviation on the breathing, for that reason we need to evaluate the patient completely with endoscopy and sinus CT scans to evaluate the whole problem before deciding that the septum is the problem and go to correct it.(see nose block in adults )
We can think of the nose as a path with many obstacles obstructing it, some obstacles are easy to remove and the others are very heavy and not easy to remove, if we can pass through this path by removing just the small light obstacles, then we should do that and neglect the heavy objects. But if removing the light object ended up with a tight not satisfactory passage, then we have to do the hard job and remove the large obstacles, but surely we are not going to do the things in the opposite direction. So if we can improve breathing and make it close to normal with decreasing the congestion of the nasal mucosa and turbinates and treating the allergy by some nasal sprays for example, then we don’t need to correct the septum, but if the breathing is still bad after treatment, then we need to get something corrected by surgery, either the septum alone or with other problems.
Septoplasty is the surgery performed to correct the deviation in the nasal septum, it’s usually and one day procedure done under general anesthesia, it includes a small incision inside the nose to free the cartilage of the septum from its lining mucosa, correction of the deviation, might include cutting parts of it, then realigning the mucosa over the cartilage. It does not include correction of the shape of the nose or the outer cartilages and bones. Complications include minor bleeding, pain and nose block for 2-3 days.
Rhinoplasty is the surgery conducted to correct the shape of the nose, it might include external or internal incisions, might include correction of the septum or not, it’s usually a longer and more complicated surgery than septoplasty, it might be done at the same time with septoplasty but it includes different approach.

Otitis media and vertigo between gossips and science
May 1, 2017