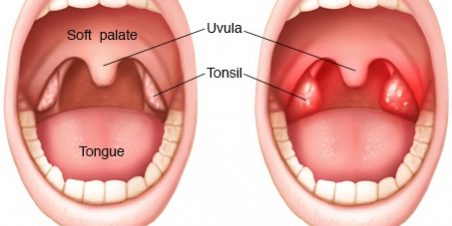 Sometimes, tonsils get enlarged after an infection or inflammation and keep enlarged after resolution of the cause of the infection which cause narrowing of the nose and throat air passages, sometimes tonsils keep infected recurrently and frequently affecting negatively the health of the patient as well as his/her school or work performance. Sometimes tonsils get food debris and bacteria accumulated as dormant sores of infection and bad odor of the mouth, and then they would be actually the cause of recurrent infection rather than the defending organ, in such cases surgical removal of the tonsils would improve the local health of the throat and nose as well as the general patient’s health and life style.

The main and common indications of tonsillectomy include:

2/ sever snoring and sleep apnea due to large tonsils and adenoids that are not relieved by medical treatment.

3/ other rare indications like bad smell of the mouth and the presence of a cancer on the tonsils.

Tonsillectomy is usually a one day surgery, patient will be admitted to the day care service, put to sleep by the anesthesia doctor and the tonsils will be removed by several ways ranging between cold steel instruments to bipolar, to coablation, it will take less that 15 minutes usually and then the patient will be awakened and sent home several hours after the procedure. (see tonsillectomy surgery)

Complications of tonsillectomy are rare and include inflammation of the site of surgery, bleeding, and anesthesia complications. Pain is the most common problem and is usually controlled with pain medicine and frequent meals.

Otitis media and vertigo between gossips and science
May 1, 2017